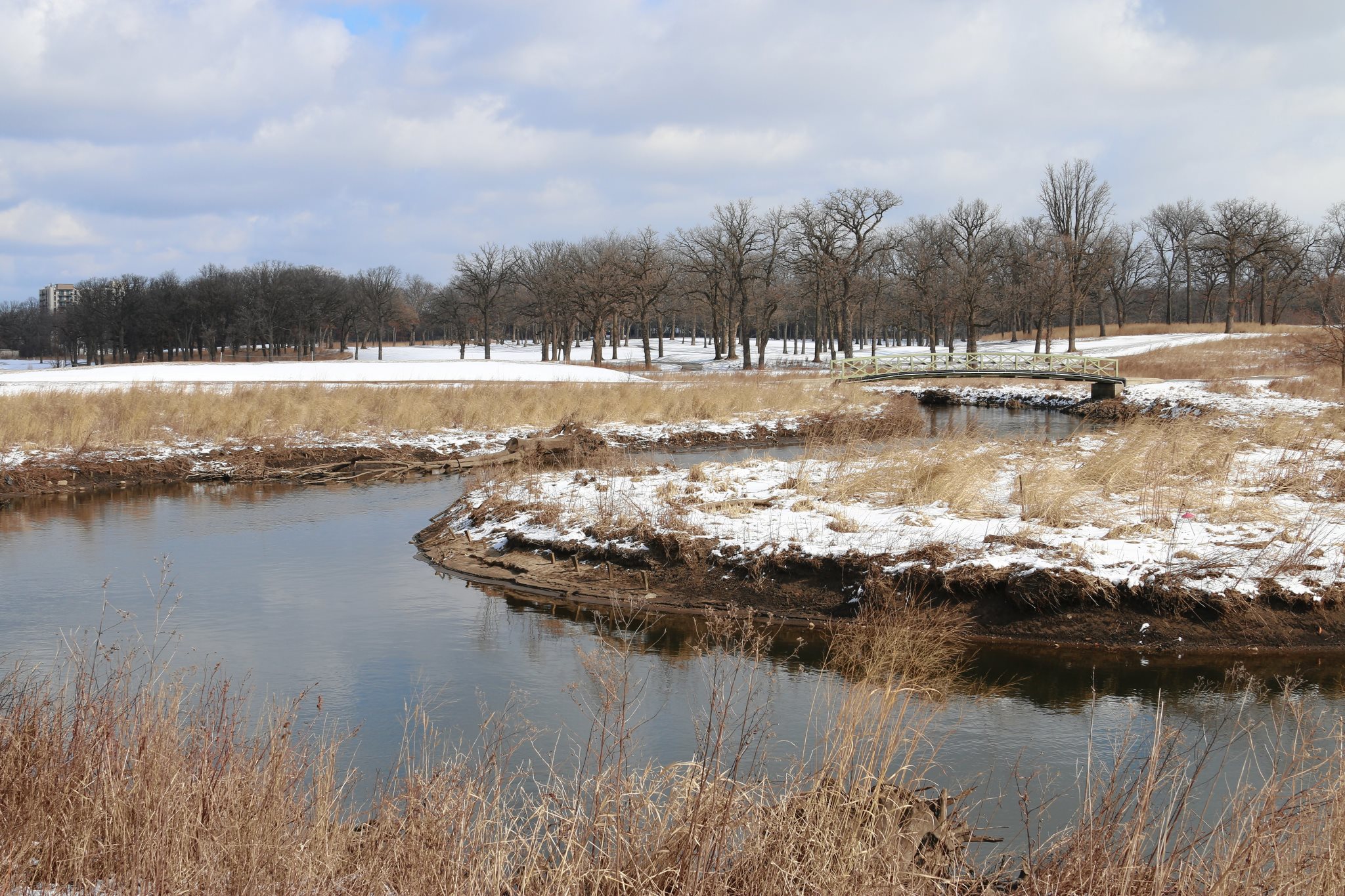 Flooding at The Preserve at Oak Meadows golf course is under control thanks to the DuPage River Salt Creek Workgroup, which has restored the features that naturally control flooding and keep waterways healthy. (Courtesy of Peter Gray) 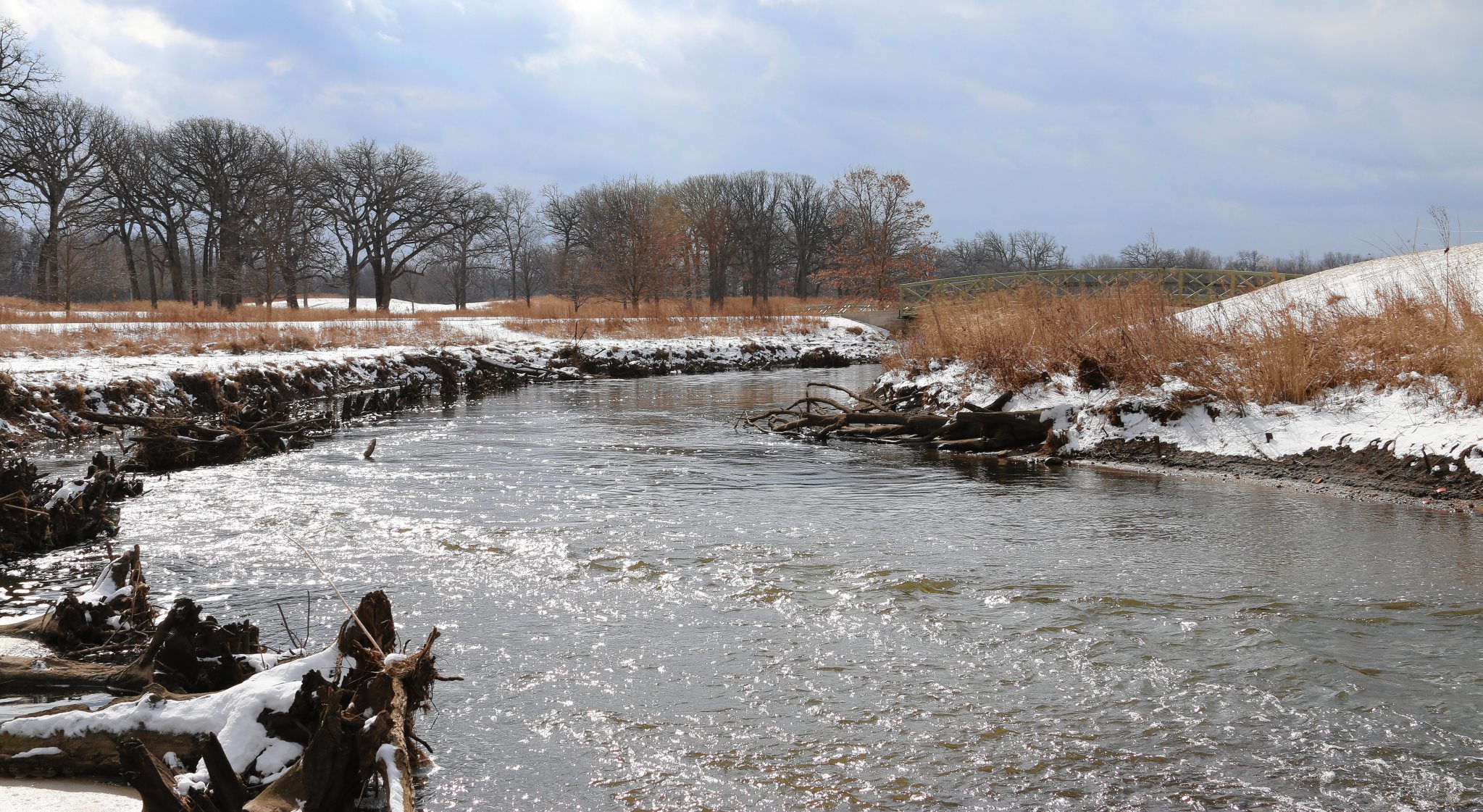 The Preserve at Oak Meadows is best known for its award-winning, 18-hole golf course, but it’s also a flood prevention system, a water quality project and an important wildlife area. (Courtesy of Peter Gray) 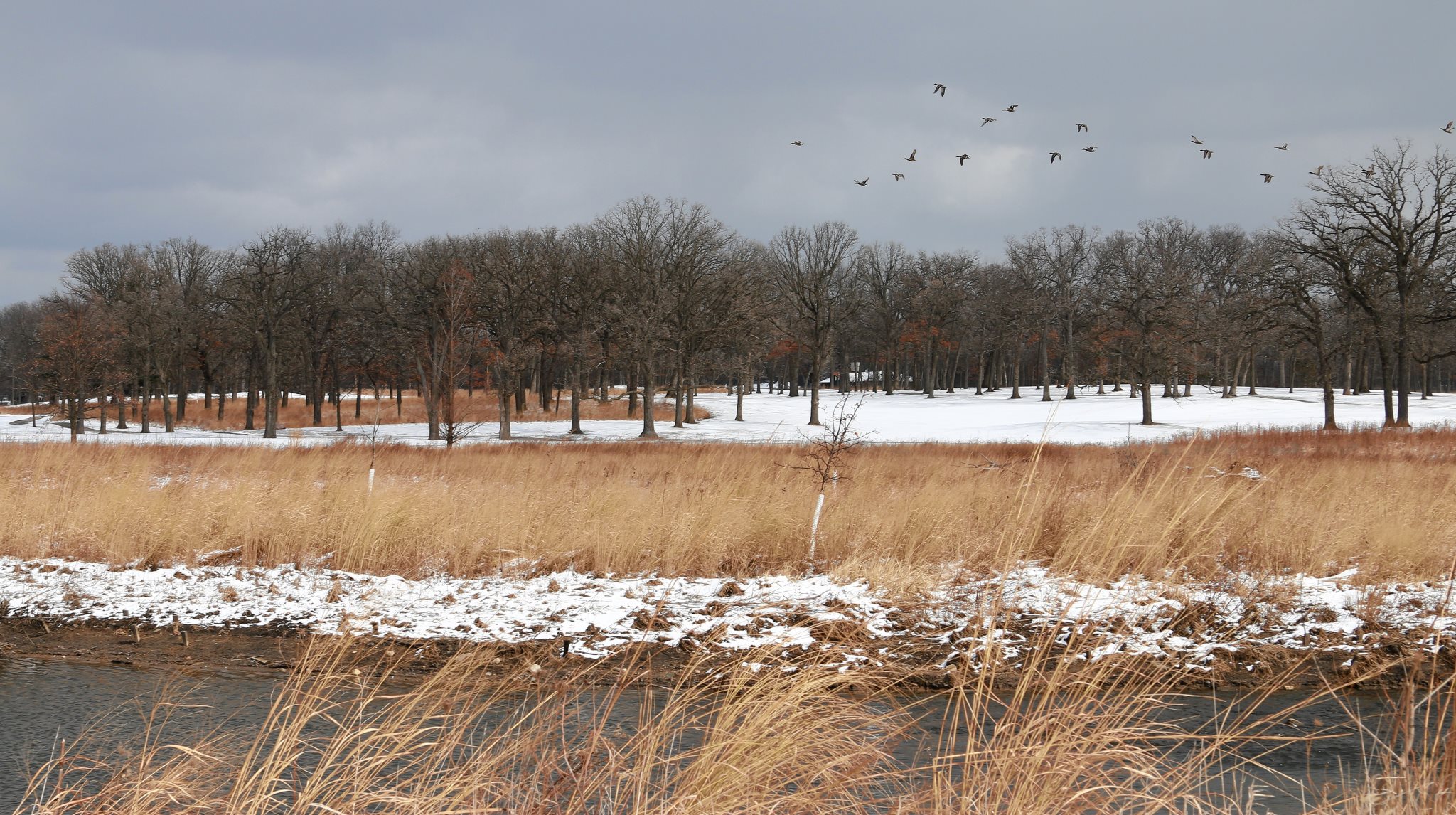 The Workgroup continues to study the water quality and wildlife across the watershed. The group is looking to identify other large-scale, collaborative projects that can create major improvements. (Courtesy of Peter Gray)
PREVIOUS IMAGE

On a winter morning when wind rustles prairie grass and the creek splashes along its banks, The Preserve at Oak Meadows doesn’t feel like a golf course at all. According to DuPage County Forest Preserve Executive Director Ed Stevenson, that’s exactly the point.

Since it reopened in 2017, The Preserve at Oak Meadows has been best known for its award-winning, 18-hole golf course, but it’s also a flood prevention system, a water quality project and an important wildlife area. In fact, Stevenson prefers to describe Oak Meadows as “a preserve, that happens to include golf.”

At the heart of the property is Salt Creek, which winds for 1¼ miles through the preserve in Addison. For decades, this stretch of Salt Creek had been treated like a problem. Its banks had been covered with metal and concrete and stripped of natural vegetation. Its flow stagnated behind obsolete dams and it regularly flooded both the golf course and nearby homes.

With flood damage affecting the course for months at a time, it was clear that the Forest Preserve District needed a new approach to managing the property. That new approach would work with nature, rather than against it.

The DuPage River Salt Creek Workgroup had been developing a plan to address water quality issues in Salt Creek that involved restoring the features that naturally control flooding and keep waterways healthy.

These features include free-flowing currents with meandering channels to increase oxygen in the water and sloping banks and wetlands that soak up floodwaters.

The Workgroup is a collection of local public agencies, private consulting firms, and environmental advocacy groups that uses scientific analysis to find cost-effective ways to improve the quality of rivers and streams in DuPage and Cook counties.

They’ve found that stream restoration creates bigger water quality benefits at a much lower cost than other water treatment options. As a result, they are designing and funding high-impact projects throughout the area in a bid to both improve water quality and control regulatory costs.

In 2015, the Workgroup partnered with the Forest Preserve District and DuPage County on an ambitious project at Oak Meadows that turned Salt Creek from a liability to an environmental asset for the surrounding community.

Now the Workgroup believes that the Oak Meadows project can serve as a model for dealing with environmental, water quality and land use issues in other parts of the region.

It’s obvious to any visitor that The Preserve at Oak Meadows was designed with nature in mind. Roughly 85% of the property is devoted to native oak savanna, prairie and river ecosystems. The golf cart paths double as a 5.6-mile trail system where nature lovers can view red-tailed hawks, great egrets, eastern bluebirds and other wildlife that call the property home.

But according Stephen McCracken of the DuPage River Salt Creek Workgroup, the restoration work is about much more than making it look pretty.

McCracken and other experts know that restoring streams to a more natural state is often the most effective way to improve water quality, control flooding and support wildlife. But these stream restorations are based on data, not appearances.

The Workgroup collaborated with the Forest Preserve District and their golf course architect on a plan that balanced recreation and conservation. Crews removed two dams which had starved the water of oxygen, encouraged excessive algae growth and built up sediment on the creek bed.

They restored the natural sloping banks of the creek and planted native vegetation that filters runoff and provides habitat. They added gravel bottoms to support aquatic life and created wetlands that challenge golfers, while also safely containing stormwater.

Designing a new golf course while simultaneously restoring a creek and creating wildlife habitat was no small task. It required moving 700,000 cubic yards of earth, creating 24 new acres of wetlands, seeding 135 acres with native plants, installing 9,600 tons of stone in the creek bed and planting 45 acres of grass for greens, fairways and tees.

But the result has been hailed as a success, winning awards from Golf Digest, the American Society of Landscape Architects and Chicago Wilderness — who called the Preserve “a modern model of a symbiotic relationship between conservation and recreation.”

For McCracken and environmental regulators, success is most often measured in bugs. Or, more accurately, the populations of macroinvertebrates like mayflies, dragonflies, crayfish and snails.

The presence of these creatures is considered the best metric of overall water quality. Samples from before and after the restoration project show the arrival of several new species at Oak Meadows and habitat quality scores that have nearly doubled.

Stevenson sees that the benefits of the restoration project are just beginning.

“The natural areas of the preserve continue to evolve each year that the habitat matures ... There’s been an amazing change from one year to the next, and the maturity of the property is only going to increase.”

The Workgroup continues to study the water quality and wildlife across the watershed. The group is looking to identify other large-scale, collaborative projects that can create major improvements for the local environment.

In collaboration with the Illinois State Toll Highway Authority, work is currently underway on a dam removal and stream restoration project at Blackwell Forest Preserve in Warrenville that will create more than 1 mile of new creek channel and more than 18 acres of new wetlands.

As pressures on our natural resources increase, conservation groups will need to identify ways that development can move forward while still protecting wildlife and the environment. From the perspective of the DuPage River Salt Creek Workgroup, Oak Meadows is one example of how that can be done.

“We need to focus our resources on areas where we can create the most impact, and that’s not generally something one village can do on its own. The Workgroup collaborates to find opportunities that will benefit the region,” McCracken said.

“We’re committed to pursuing similar projects within DuPage and Cook counties and giving similar attention to each one.”