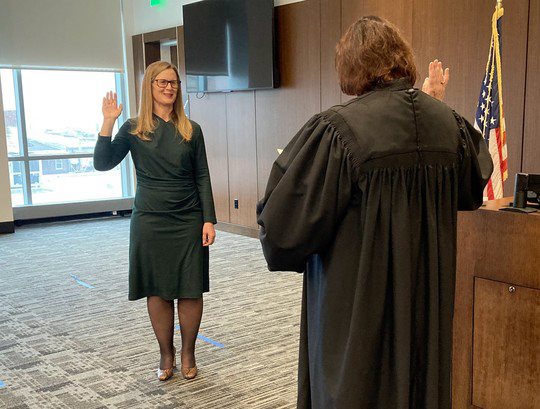 Eric Rinehart, the Highwood Democrat who beat incumbent Republican Mike Nerheim, went first and was sworn into his new role as Lake County state’s attorney by Lake County Chief Judge Diane E. Winter about 8:15 a.m. at a jury assembly room in the courthouse.

Rinehart, who has worked for years as a defense attorney opposing county prosecutors in court, addressed his new staff Tuesday afternoon in a Zoom call, saying he was excited to be getting started and meeting some of them for the first time.

Rinehart said his office will “fight every day to make Lake County safer without sacrificing our commitment to equality, transparency, or the rights of all individuals.”

“We can be safe in our communities and fair in the courthouse at the same time,”

Rinehart said. “These goals are not in inherent conflict, and if they ever seem to collide, we must be smart enough and brave enough to try new ideas, to speak truth to power.”

Along with state’s attorney, Democrats won the races for coroner, circuit court clerk and recorder of deeds in Lake — once a predominantly Republican county. In 2018, Democrats were elected sheriff, clerk and treasurer. The only Republican to hold countywide elected office is Regional Schools Superintendent Roycealee Wood, who ran unopposed in 2018 and has served in her role since 2002.

Banek said she was using her first day to meet the employees.

“I know they do a great job and don’t want to micromanage them,” Banek said. “I have no intentions of making sweeping changes in the first 30 or 60 days.”

Mary Ellen Vanderventer, who won reelection for recorder of deeds, had her swearing-in ceremony at her parents’ home in Waukegan so she could mark the occasion with some family members, a little champagne and pizza. Vanderventer’s father is Bill Durkin, who was mayor of Waukegan from 1993 to 2001.

The swearing-in ceremony — conducted by her good friend Judge Charles Smith — will be Vanderventer’s last as recorder because county voters opted to eliminate the position. Vanderventer, a Waukegan Democrat who’s held the post since 1996, will work to merge her office with Lake County Clerk Robin O’Connor’s staff on or before the deadline of Dec. 1, 2022.

“Today is bittersweet but exciting at the same time,” Vanderventer said. “I wish all my colleagues the best today. Taking the oath of office and working for the people of Lake County is very special and I have loved every minute of it.”

Banek said she was excited that Democrats would now occupy nearly every elected countywide office.

“That being said, I’m here to serve everybody with the same integrity, accountability and compassion,” Banek said.