Falconers hired to discourage other birds from eating crops 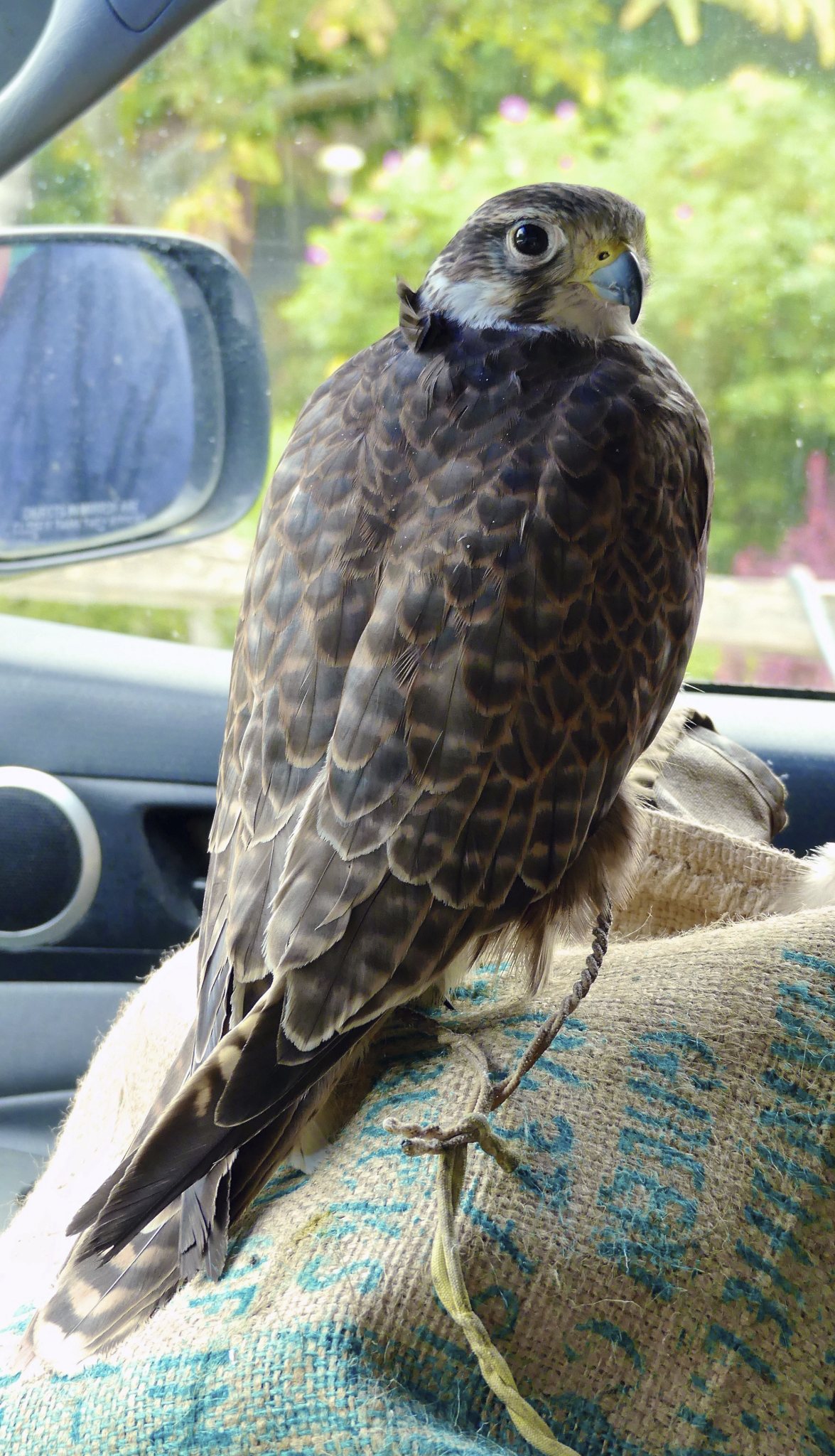 This Saker falcon, an eastern European variety, is one of several raptor species trained by falconers to chase away birds that can damage fruit crops. 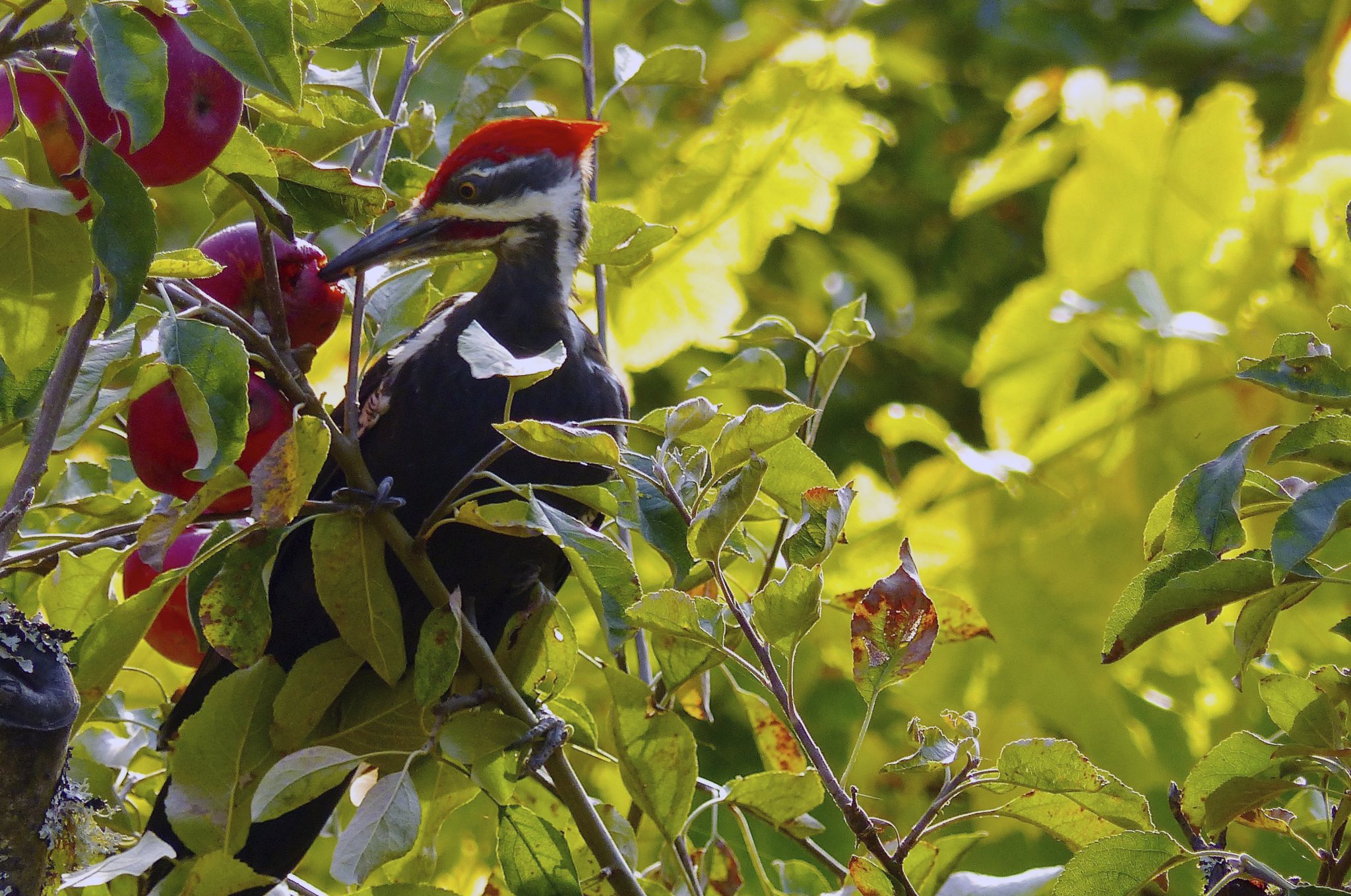 A pileated woodpecker eats apples from a tree in an orchard near Langley, Washington. (Photos Courtesy of Dean Fosdick)
PREVIOUS IMAGE

Frustrated growers tired of seeing wild birds devastate their fruit crops are turning to raptors to patrol their fields, orchards and vineyards.

This ancient predator-prey relationship is creating work for scores of falconers, who follow the seasonal cherry, blueberry and grape harvests from California to Oregon, Washington state and beyond.

“We’ve seen blueberry farms with significant damage — 40 percent or more of their crop,” said Brad Felger, a master falconer and owner of Airstrike Bird Control Inc., in Mount Vernon, Washington. “That pretty much justifies the cost of using us.”

Falconers train their birds to intimidate rather than destroy, since state or federal laws protect all but a few bird species. It is illegal to kill pest birds without a permit.

“Bird abatement using raptors is not about killing, it’s about chasing,” Felger said. “We’re careful about keeping the quality of abatement high.”

Permits are also required to remove birds of prey from the wild or import them from other nations. Only captive-bred raptors can be used for agricultural work.

“No one under any circumstances may keep a raptor as a ‘pet’,” the Washington Department of Wildlife says. “Only licensed falconers may have birds of prey, and these birds must be flown freely (allowed to leave if they choose) and hunted regularly.”

Fruit growing is more profitable and protected from biohazards when the fruit is free of cuts, gashes and animal wastes, Felger said.

“Hand pickers working in a damaged field must do a lot of time-consuming sorting,” he said. “It takes more labor to harvest that kind of crop than it does one without bird damage.”

The falcons and hawks are trained to swoop down and scare bird pests away from fruit trees, vineyards and shrubs or simply soar and circle above.

“Birds naturally fear raptors, and pretty soon the targeted birds figure out they’re not safe and find someplace else to go,” Felger says.

European starlings are Public Enemy No. 1 for most fruit growers since they descend in large flocks to feast. Seagulls, blackbirds, crows, cedar waxwings, finches, crows and robins also contribute to crop damage.

Falconers’ fees vary. “Certain fields are harder to work with raptors than others,” Felger said. “Cost effectiveness generally depends upon size and topography. For projects larger than 1,000 acres, you’ll probably have to add a second falcon.”

“It’s hard having a falcon out there unless you have enough volume,” Fletcher said.

“They’re (sky puppets) not predictable in the way they move and that’s helpful,” Fletcher said. “I have a half-dozen.”

PREVIOUS ARTICLE
Article 77 of 147
NEXT ARTICLE